The definition of “work” can include a variety of things including ideas, words, images, etc. Anything that is seen as an unethical and unattributed use of another’s original creation can be defined as plagiarism.
However, the definition of plagiarism is not always consistent. Different industries, for example, have different standards. A lawyer, for example, is held to different standards than a poet, which is different than a speechwriter and different from a musician.
Because of this, as with copyright infringement, many cases of plagiarism are divisive as to whether or not a violation was committed.

On the surface, plagiarism and copyright both have a great deal in common. Most things that can be plagiarized could be copyrighted. After all, most plagiarism deals with either creative or academic work and those types of works, typically, qualify for copyright protection when they are new.

The Differences
Plagiarism shares some elements with copyright infringement. Both situations can involve the unauthorized use of intellectual property. However, it is possible to plagiarize without infringing on a copyright. For example, if a student preparing a report chooses to use a quote from a source and does not properly cite the original source, he or she is essentially claiming the quote to be his or her own words. This amounts to stealing the words of another person. While the quote may be from a work in the public domain and is not subject to any claims of compensation, plagiarism has still taken place.
There is also a legal difference between copyright infringement and plagiarism. Federal laws in many countries protect the interests of citizens who hold copyrights. When those copyrighted works are used without permission, the owner has legal recourse to collect damages as well as receive a share of any revenue generated from the unauthorized use. In some countries, it is possible for the punishment to include a prison sentence if copyright infringement is proven in a court of law.
By contrast, plagiarism is usually more a matter of ethics than of law. The failure to provide a proper citation for a direct quote will not necessarily carry any type of legal punishment. However, engaging in plagiarism often leads to censure by academic institutions and employers. For example, a writer who presents the work of another writer as his or her own and is caught in the act of plagiarism is likely to be dismissed from the workplace. Freelance writers who plagiarize often find that word gets around and it becomes extremely difficult to secure assignments. While the chances of going to jail for plagiarism are somewhat limited, the negative impact can have repercussions that will last for years.
Because of fair use practices in many countries, copyright law can sometimes blur the lines between copyright infringement and plagiarism. This means that it is possible to plagiarize and infringe on copyright at the same time. However, plagiarism that is also copyright infringement is usually not pursued in a court of law unless some type of economic harm to the owner can be demonstrated. 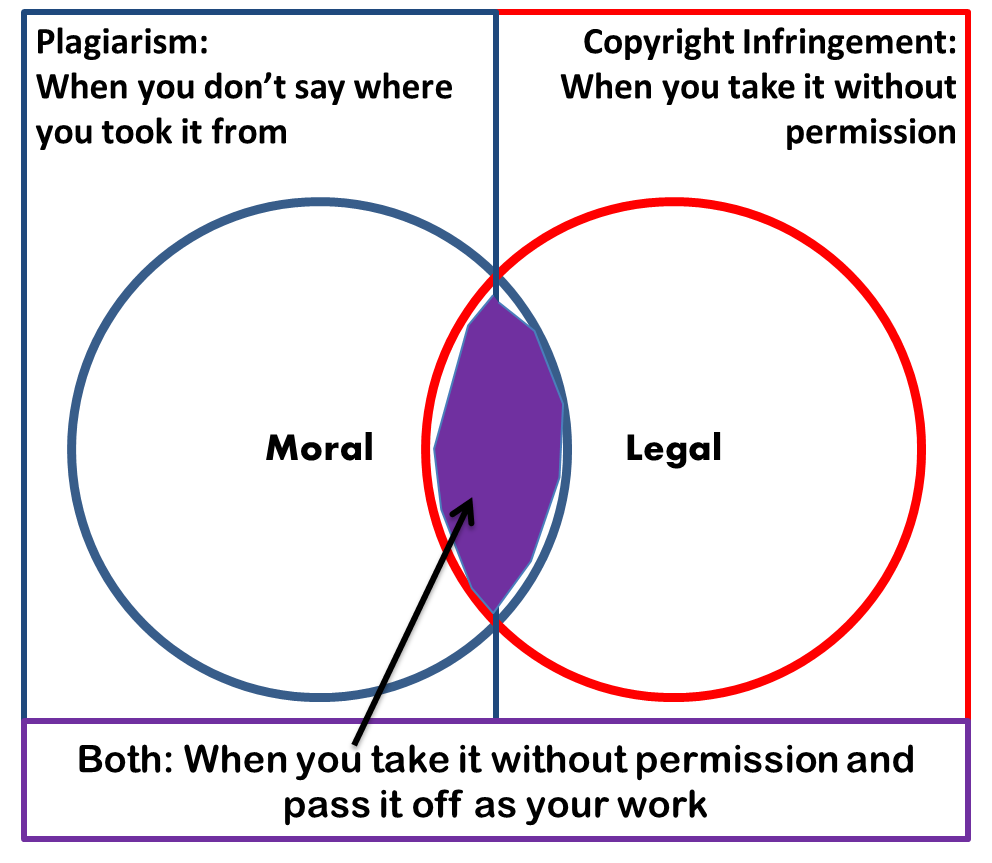 Though plagiarism and copyright infringement are often spoken of in the same breath, especially by victims of plagiarism who are seeking justice, it’s important to remember that the two are not the same thing.

Another way to think of it is this. While copyright infringement has one victim, the copyright holder(s), plagiarism has two sets of victims, the copyright holder(s) and the people who were lied to about the origin of the work.
The other important way to look at is that plagiarism is an ethical construct and copyright infringement is a legal one. Though they have a lot of overlap, they are not the same and can never really be the same.
So while plagiarism may come up in copyright discussions and vice versa, it’s important to know that the two are different in some very important ways.

The Law:
The Copyright Act, 1957 which protects originality neither defines plagiarism nor a plagiarist. Knowledge age is racing ahead with innovations and creation. There is keen competition all around and one is aiming at outwitting the other. In over enthusiasm to excel, people resort to copying others’ work, publicize the same as their own.  To-day literature, art, dramatics, music, software programmes is plagued with copying. Accordingly, instances of plagiarism are common. Plagiarism violates copyright law. S 13 of the Copyright Act,1957 (`Act’) safeguards:
(a)    original literary, dramatic, musical and artistic works;
(b)    cinematographic films; and
(c)     sound recording.
The Act plays a significant role in furthering creation. Under the Act, a plagiarist is charged with infringement and is punished if found guilty. All works to be registered must be original.
UNESCO has declared 23rd April declared as the ‘World Book and Copyright Day’ which coincides with the birthday of William Shakespeare.
Supreme Court in the case, Eastern Book Company vs. D.B.Modak (2008) 1 SCC 1 decided that there cannot be claim of copyright once the work is in public domain.
One who copies another author’s work is commonly called a copycat. Detection of copying is difficult. Whether a particular work is a copy or not, courts consider the works in question to conclude on the originality. The ‘De Minimus Rule’ applies to copyright and it states that a few words even used in continuity would not be granted copyright.
Concerned over plagiarism in legal research, Bar Council of India has decided to develop anti-plagiarism software to detect copycats.The website www.copyspace.com aids in detecting plagiarism. Instances of plagiarism in the entertainment industry is of much concern. One is out to copy from the other and at the end go to claim it as original to earn credit. Not only in , plagiarism extends cross borders in entertainment industry.
George Harrison one of the four Beatles was charged with plagiarism in respect of release of the album, `My Sweet Lord’ which resembled `He is so Fine,’ by Cliffon. The  District held guilty by stating that he had copied the songs `sub-consciously’. The Court awarded damages in the case. (Bright Tunes Vs. Harrisongs).In charges of copyright, it is necessary to demonstrate that the defendant had access to the plaintiff’s work. Inability to prove such a fact led to the collapse of a case against the Bee Gees in the case Selle v. Gibb.
The legal litmus test has been the centre of many a law suit. The British case The Balgent & Leigh vs. Random House on Dan Brown’s book, Da Vinci Code is an example. authors of ‘Holy Blood Holy Grail’ claimed that Brown had plagiarized the ‘Central Theme’ of their bookwhether Christ had married Mary Magdalene. The court ruled that Brown had only borrowed a set of non-copyrightable ideas to create a new work and Dan Brown was acquitted. ‘Krazy 4’ the bollywood film was charged for including a song which was in public domain through the television channels. The producer went for an out of court settlement. Producers are presently the copyright holder of the music of a film. The Copyright (Amendment) Bill, 2010 seeks to amend the Act to give this right to the composers.