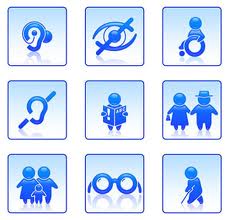 
Whenever you open your PC/ Laptop/ Tablet or your Smartphone, consciously or subconsciously, browsing through random web pages to check about news or for entertaining yourself, or even working!!, think about doing all that with your eyes closed ..
Otherwise, just think about navigating through so many websites only with keyboard shortcuts, or being unable to zoom in or zoom out the text.
Basically, the idea here is not to discomfort you, but to realise that the people who are differently abled or the ones who have less resources than us are living in a world which is beyond the horizons of our imagination, unless we put conscious efforts to think about them.

WHAT IS WEB ACCESSIBILITY:

In this context, it would be safe to infer that web accessibility means any person is able to get information on the internet regardless of age, disability, literacy, the device used etc.

WHY IS WEB ACCESSIBILITY IMPORTANT:

Rather than listing importance of internet in our lives, I would rather list the cases where internet is not useful; to save time and effort and also to refrain from stating the obvious. One important point that is worth mentioning is that, its not just the differently abled who can benefit by having more user friendly website, but everyone.
The principle behind is the same as is there in Article 14 of our Indian constitution, The Fundamental Right to Equality; the Right against discrimination.

1.The United Nations Convention on the Rights of Persons with Disabilities (UNCRPD), which came into force in May 2008,requires signatories to ensure the full enjoyment of human rights and equality under the law by those with disabilities.
Accessibility is a key guiding principle of the convention: by signing the Convention, states pledge to “enable persons with disabilities to live independently and participate fully in all aspects of life” by, among other things, promoting “access for persons with disabilities to new information and communications technologies and systems, including the Internet.”
The emphasis on accessibility is a deliberate shift in the conceptualization of disability in international human rights law, from a model of exception to a model of inclusion focusing on the state's responsibility to make society accessible to all persons on an equal and non-separate basis.

( UN General Assembly, Convention on the Rights of Persons with Disabilities: resolution / adopted by the General Assembly, 24 January 2007, A/RES/61/106, available at: http://www.unhcr.org/
refworld/docid/45f973632.html)
India has ratified the convention on October 1, 2007 but has not signed the optional protocol for the same.

2. World Wide Web Consortium’s (W3C)Web Content Accessibility Guidelines and Techniques
(WCAG),originally developed in 1999 and updated in 2008.The Guidelines provide a ready reference of accessibility principles for websites, web software and website tools, and an easy means of assessing the accessibility of websites. These have been incorporated, within the policy frameworks of many countries.
‘WCAG Overview’, available at World Wide Web Consortium (W3C)
(http://www.w3.org/WAI/intro/wcag.php')

1.The Constitution of India guarantees to its citizens the right to receive information. The Freedom of Speech and Expression enshrined in Art. 19(1) (a) is inclusive of the right to receive information.  This right extends to receiving speech that is of a commercial nature as well. Under Article 14 of the Indian constitution the people have been guaranteed equal rights without bias of any kind- Race, sex, Religion and it includes right against discrimination against people with disabilities also

2.Persons with Disabilities (Equal Opportunities, Protection of Rights &amp; Full Participation) Act which was enacted in 1995 with the objective of ensuring equal opportunities for people with disabilities and their full participation in nation building.

3. India is signatory to Biwako Millennium Framework Towards an Inclusive, Barrier-free and Rights-based Society for Persons with Disabilities in Asia and the Pacific, 2002.

While researching for this blog, it occurred to me that all web based service providers must have their own accessibility criteria, for example, your android device, ipad, your blog, facebook, Microsoft software's, yahoo etc.
Google discusses its accessibility features and tells users how to go about it, also provides resources to the developers and the publishers apart from asking suggestions(http://www.google.com/accessibility/)

The Indian Government provides for the accessibility statement in the following link (http://india.gov.in/accessibilitystatement.php). Theres also a complete set of guidelines for government websites given (http://web.guidelines.gov.in/#&amp;panel1-1)

1. In 2006, in the state of California a case was filed by the National Federation of the Blind against Target Corp. stating that the website of the retailer was  not accessible to the blind,the case was finally settled and the company made its website accessible afterwards.

2. In he Commissioner found that SOCOG had engaged in unlawful discrimination against Maguire in breach of Section 24 of the DDA 1992. SOCOG was ordered to render its website accessible including ALT text on all images and image map links on its web site; providing access to the Index of Sports from the Schedule page; and providing access to the Results Tables to be used on the web site during the Sydney Olympic Games by 15 September 2000.Judgement is given here (http://www.humanrights.gov.au/disability_rights/decisions/comdec/2000/DD000120.htm)

3.In National Federation of Blind Vs Arizona State University, which was settled later the issue was inability of access of the amazon kindle devices provided by the University by the blind students. The press release regarding the settlement can be accessed here (http://www.nfb.org/node/1189)

Though there are not too many case laws all over the world regarding this law, the situation is definitely changing for the good.

4. In the Indian case, Praveen Kumar G vs Union Of India & Ors ( WP (C) 2145 of 2011),(http://lobis.nic.in/dhc/AKS/judgement/14092012/AKS12092012CW21452011.pdf), where the issue was that the concessional rates by the IRCTC(A government web portal for internet train bookings in India), were available only to senior citizens and not to other disabled people because of lack of infrastructure with the government. The court directed the Government to form and follow guidelines in order to provide the facility of concessional booking on the internet to the disabled.

The Web Content Accessibility Guidelines (WCAG) documents explain how to make Web content more accessible to people with disabilities.
Web "content" generally refers to the information in a Web page or Web application, including text, images, forms, sounds, and such.

Email ThisBlogThis!Share to TwitterShare to FacebookShare to Pinterest
Labels: The Analysis